Najwa Nimri
Alicia Sierra was a police Inspector for the Spanish police force.

She is brought onto the case to stop the robbery of the Bank of Spain. She also was in charge of interrogating Rio when he was taken into custody in Part 3.

In Part 3, Episode 8, she brings Nairobi's son, Axel to the Bank of Spain. Luring Nairobi to the window, Sierra gives permission for one of her snipers to shoot.

In Part 4, Episode 8, she pins all accusations against her on Colonel Tamayo and the Spanish Government. She is fired from the police department, and Tamayo orders a search for her. Sierra flees from her residency before the police find her. At the end of Part 4, she is seen pointing a gun at the Professor , and the season ends.

In Part 5, Alicia captures the Professor and tortures him. She ends up capturing Marseille and Benjamín Martínez as well. However, when Alicia goes into labour and has complications, she has no choice but to untie them, so that they can help deliver her baby. She names her baby Victoria.

The Professor and Alicia end up working together. When police chase them, they hide in an empty apartment. Later, Alicia helps find the location of the stolen gold.

Alicia has red hair that is straight and long. She has a fringe. She is pregnant throughout Part 3 and Part 4, and gives birth to her daughter Victoria in Part 5.

Alicia is merciless, inhumane and unsympathetic as she tortured Rio horrifically, and smokes while pregnant. She also shot Sergio in the feet and left him hanging.

She is strong, as she works throughout her pregnancy, up until she gave birth. She is also clever like the Professor as she managed to put all the pieces together and find the Professor's hideout in the part 4 finale.

She later mellowed down during her time as a fugitive while escaping with the Profesor. She cares for her daughter after she has given birth at the Stormwater tank with the help of Benjamín, Marseille and the Professor.

Germán was Alicia's husband, and father of her child. At the time of the Bank of Spain Heist, Germán had passed away from pancreatic cancer. 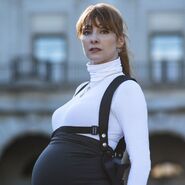