He is the second-in-command of the Royal Mint of Spain heist, but also planned the Bank of Spain heist years prior, which he shared with The Professor and Palermo.

When he was young, his mother had a relation with another man which resulted in the birth of his half brother, the Professor.

Before joining the Robbers of The Royal Mint of Spain, Berlin was a jewel thief, with twenty-seven robberies to his name of jewelry stores, auction houses, and armored vehicles. His biggest theft, before the Royal Mint of Spain, was 434 diamonds in Champs-Élysées, Paris. He was later diagnosed with Helmer's Myopathy.

Somewhere in his life, he was recruited by his half brother to be the leader of the “greatest robbery ever”. He was trained in various things along with his fellow robbers, and he learned all the details of the heist.

Berlin has been married 5 times. One of his ex-wives is Tatiana. They divorced after Berlin discovered that Tatiana had cheated on him with his son Rafael.

Berlin was the on-field leader of the Heist Crew, making decisions that were not important enough to consult with The Professor or when he couldn't answer the phone.

Berlin was still the on-field leader, temporarily being replaced by Nairobi only to later on regain his position. In the end, he sacrifices himself and gets gunned down by Suárez in order to give the other robbers time to escape.

Although Berlin is dead, he shows up in flashbacks from 5 years ago in Italy with The Professor and Palermo. These flashbacks include him coming up with a plan, him stabbing another man in a bathroom, or his own wedding with Tatiana. In The Paris Plan, he is shown conversing with Palermo, which ends in them kissing.

In flashbacks, Berlin is shown bringing his son Rafael to his first ever heist at Frederiksborg Castle in Denmark, with the assistance of his wife Tatiana, Marseille and Benjamín Martínez. However, Rafael and Tatiana end up developing feelings for each other, leading Tatiana to ask for a divorce. When Berlin discovers that she has been cheating on him with his own son, he is heartbroken and devastated. In a rage, he trashes the bar in a hotel, leading to his first ever arrest and mugshot. He denies Tatiana and Rafael his inheritance.

Berlin is believed to be arrogant, narcissistic, and deemed to be a psychopath by his fellow crew, but he is shown to be extravagantly elegant, professional and charming. He is calm, patient as well as eloquent and plays mind games with some of the hostages. It is said that he has a pathological need to make a good impression.

Berlin has been married 5 times, however none of them worked out. He describes these marriages as 5 times that he believed in love. He stopped believing in love because he felt that once a child is born, it becomes the mother's centre of attention and that the woman is no longer "sexy".[5]

During the heist at the Royal Mint of Spain, Berlin meets Ariadna Cascales, an employee of the mint who is taken hostage. Early in the heist, when Ariadna trembles in fear, Berlin approaches her to tell her than he is not a monster. Later, when she and four other girls are sent to a room and she witnesses her fellow hostages being intimidated and taken away, Ariadna begins to panic. Fearing for her life, she asks to speak privately with Berlin. In an office, she "seduces" him, thinking that it will increase her odds of surviving the heist. They regularly have sex, which Ariadna describes to Mónica as rape. In return, Berlin provides her with tranquilizers. Ariadna confesses that Berlin has plans to marry her, but she only intends to stay with him for survival and to get a portion of the heist money.[6] Nairobi later reveals this information to Berlin.

During the final shootout with police, Berlin forces Ariadna to stay with him while he guards the tunnel that the other crew members are escaping from. Berlin dies during the shootout and it is assumed that Ariadna was rescued.

Tatiana and Berlin get married in Berlin's Wedding. During the wedding, he sings "Ti Amo". They both also manage to steal Viking Gold at Denmark by using the concert as a distraction. But they broke up when he found out that his son is dating his wife. due to the heartbreak He was arrested.

Out of all the people in the crew, Berlin is one of the people that Tokyo disliked the most. She had defied and challenged him on multiple occasions throughout the show, even going so far as to hold him at gunpoint to get him to do what she wanted. The height of her aggression with Berlin was when she played Russian Roulette with him in the bathroom, which drove Berlin to tie her to a cart and push her out of the Royal Mint.

Tokyo describes Berlin as a shark in a swimming pool.

Nairobi is often in conflict with Berlin and disagrees with his methods.

Palermo was in love with his best friend Berlin for ten years, so much so that he suffered severely from depression after his death, turning to alcohol as a coping mechanism. They had met prior to the show's events, and the two came up with the Bank of Spain heist together.

One evening, after talking to his brother about the Bank of Spain heist, Berlin went into Palermo's room and woke him up to tell him that he told Sergio about the plan, and that he thought it was amazing. The two then go to tell Sergio about their plan to get the gold out.[7]

Some time before the Royal Mint of Spain heist, Berlin admits to knowing that Palermo loves him, which Palermo brushes off. Berlin confesses that he's never felt anything with any of the women he's been with that's remotely similar to what he has with Palermo. He calls them soulmates, but only 99% as he likes women a lot, and the 1% defines his desire. Palermo questions what's 99% to 1%, and then kisses Berlin, before asking him if he's a coward. Berlin then pushes him against a wall, and they passionately kiss, before Berlin parts with him and says that he would do anything to feel "this". He professes his love to Palermo, before saying how his brother is right and that they have to part ways and scrap the plan. Before leaving, he says that time will eventually bring them back together.[8]

During an argument, Nairobi accuses Palermo of being so weak that he has never been able to tell Berlin that he is in love with him.[9]

Berlin and the Professor are half-brothers and have a close relationship.

In a flashback of Berlin and the Professor in Italy, Berlin reveals that he has Helmer's Myopathy, a condition that his mother had as well. The doctors predicted that he would have 3 years to live, but Berlin is hopeful that he will have 6 or 7 years to live. The Professor immediately decides to call off the heist and find treatment for him abroad, but Berlin refuses as there is no cure and he preferred to continue with his passion - robbing. 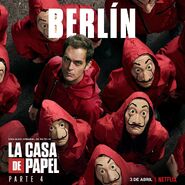 Berlin with the most terrified hostages

Berlin and Tokyo in class