Danny Fehsenfeld (English, New)[3]
Santiago López, better known by the code name Bogotá, is a character in the Netflix series Money Heist series, appearing as a main character in season 3 and season 4. He was part of the crew who carried out the robbery at the Bank of Spain.

Not much is known about Bogotá's early life. He has seven children around the world: Emilio (Venezuela), Julián (Mexico), Erik (Iceland), Hanna (Finland), Drazen (Montenegro), Yaris (Greece), and Ivanna (Ukraine).

Prior to the Bank of Spain heist, He also participated in the Fredericksborg castle heist alongside Rafael, Tatiana, Marseille and Berlin which he take the role of a SCUBA diver.

In season 4, he fell in love with Nairobi.

Bogotá is the world's best welder and has a vital role in the heist at the Bank of Spain. He is the main member in charge alongside Nairobi to lead the group that is melting the gold bricks in the national reserve into grains of gold at the Bank of Spain. It is through his talents of welding that the team is able to pull-off the successful extraction of the gold from the flooded vault. His welding and heroic efforts (placing a bomb underwater while being present in the enclosed vault, welding underwater without an oxygen tank) allow the heist to move forward as planned initially.

He is a tall man with a dad-bod type physique and dark brown hair with a slightly lighter brown beard. He has brown eyes.

Bogotá is generally a good guy who respects his team and is willing to help his colleagues out. He acts like a typical alpha male as he is tough and brave, but also makes slightly sexist remarks that objectify Nairobi. When she calls him out, he learns from this mistake. He doesn’t like vegans much.

Bogotá believes that a good father is one that behaves exactly the same way they did before becoming a father, and he believes himself to be a good one. He admits that he's not a present father and that he only shows up unannounced from time to time, but he claims that he takes care of all of his children. Bogotá says that he doesn't ask them for anything but, nonetheless, they throw their arms around his neck and cover him with kisses simply because he's their father. He keeps a photo of each of his seven children in his wallet and seems to know them to a certain degree, judging by the way he describes them to Nairobi and Denver.

Emilio is the oldest of Bogotá's children and lives in Venezuela. Julián lives in Mexico City; he's growing a mustache and calls Bogotá "güey" (dude). Erik, from Iceland, who Bogotá says is funny as hell. Hanna, a violinist, lives in Finland and is described as being a beautiful girl. Drazen from Montenegro, who Bogotá labels as a really boring kid. Yaris lives in Thessaloniki (Greece) and who Bogotá says is quite a character. Ivanna is ill-tempered, lives in Odessa (Ukraine) and is an artist.

Initially, Bogotá and Nairobi banter with one another. When he says something sexist and Nairobi stands up for herself, he is smitten. He falls in love with Nairobi, but Nairobi tells him she wouldn't even touch him with a 10-foot pole. Yet, when she gets shot initially in the lung and has surgery, Bogotá is by her bedside throughout her recovery ensuring she is safe. While she is still asleep from the surgery, he prepares a means of transportation for her as he knows it will be difficult for her to walk and she will want to be involved in the heist still. This expresses how much he cares for Nairobi. When she wakes up, he confesses his love for her by saying he can imagine her dressed in white saying "suck dick." She reciprocates these feelings and they share an intimate moment looking into one another's eyes.

Post surgery and their visit to the team working on melting the gold, Nairobi and Bogotá are alone in an elevator together. She teases him that he is being shy and not flirting with her anymore. He explains he does not want to take advantage of her while she is hurt, and she teases him and asks if he still wants to be a couple. He proves he cares about her by simply kissing her. She mocks him, saying "You call that a kiss?" Nairobi gets up with the help of Bogotá and they share a passionate kiss in the elevator.

Bogotá continues to take care of Nairobi as Gandía is on the loose. However, once he has to leave her to help his fellow gang members, she is taken hostage by Gandía in the bathroom. Bogotá is devastated and desperately wants to save Nairobi and hopes he can with the help of his team.

Matías and Bogotá have been associates for 6 years. However, their relationship doesn't appear to be amicable. Bogotá was angry at Matías for pretending not to comply with orders in front of other hostages. He reveals that he has wanted to slam Matías' head against a wagon 6 times.

Agustín is one of the welders that work under Bogotá as a smelter during the heist.

Alfonso is one of the welders that work under Bogotá as a smelter during the heist. 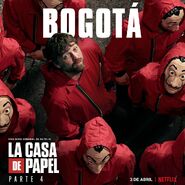