Chief Security Guard at the Bank of Spain

Gandía appears as one of the former hostages in the Bank of Spain but he manages to escape after following advice given to him by Palermo.

He had been the former head of security at the bank. After he managed to escape from the bank, he joined the police in trying to track down members of the heist group.

He was not afraid to start a fight with the gang and escaped from his handcuffs with the help of Palermo and attempted to smother Nairobi but it thwarted by her stabbing him in the neck with a syringe. He also attempted to strangle Helsinki with a noose. He is then able to capture Tokyo. Gandía later tortures and executes Nairobi.

Gandía returns to the Bank of Spain with a group of other soldiers to fight against the robbers.

Defying Sagasta's orders, Gandía throws a grenade at the robbers, which ends up being thrown back at them and killing Mateo Canalejas.

After Tokyo is shot many times and lying on the ground, Gandía stands over Tokyo to mock her. In a final act of defiance, she detonates the grenades tied on her, killing Gandía and several other soldiers, except for Sagasta, Arteche, and Vazquez.

Gandía is bald and has a small scar above his right eye.

Following Berlin's visit to Bank of Spain, Palermo began investigating Gandia's background in an attempt to anticipate potential threats to the plan. Confirming Berlin's suspicions, it was revealed that Gandia was in fact a member of the armed forces; presumed to had taken part in "black operations" based on the absence of official records during his years in the military. This granted Gandia mastery in numerous fields including, but not limited to, 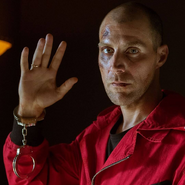