Denver was raised by his father Moscow, who abandoned Denver's mother at a roundabout due her drug use. For many years, Moscow led Denver to believe that his mother abandoned him.

Denver was one of the robbers participating in the Royal Mint of Spain heist alongside his father, Agustín Ramos (Moscow). His father invited Denver to join the heist due some issues that he was having with traffickers.

During the heist, Moscow reveals the truth about Denver's mother, resulting in an argument and rift in their relationship. However, he is forgiven shortly afterwards when Moscow dies after being shot by police.

In Part 5, Manila confesses to Denver that she has feelings for him. Denver tries to push her away, but when they talk, she makes Denver realise that he has much more in common with Manila than with Mónica. Denver and Manila end up sharing a kiss.

Later, Denver admits to Mónica that he often partied while they were living in Indonesia. Mónica reveals that she was already aware of this but did not confront him. Denver agrees that in the future, he will be honest with her when he goes out.

Denver has dark hair that is short and curly. He is at a medium height. he is very athletic, and has a muscular body. he also has very beautiful blue-gray eyes, and a square jaw. Denver is very handsome for his age.

He is hot-headed, but shown to have a sensitive side when he chooses to protect hostage Mónica Gaztambide instead of disposing for her as instructed by Berlin.

According to Denver's father Moscow, all of his relationships prior to the heist were with women that were neither attractive nor intelligent. He previously dated a woman named Vane, however not much is known about her.

In Part 1, Denver meets Mónica, the secretary and mistress of Arturo Román. When Berlin discovers that Mónica hid a cell phone in her clothes, he orders Denver to kill her. However, Denver is unable to kill her. He shoots her in the leg instead and hides her in a vault. They spend significant time together while Mónica's wound heals. They soon fall in love and start a relationship, which Nairobi describes as "Stockholm Syndrome". Mónica becomes loyal to the crew and escapes with Denver after the heist ends.

Between Part 2 and Part 3, while Denver and Mónica are hiding in Indonesia, Monica gives birth to Arturo's son Cincinnati and Denver becomes his step-father.

In Part 3, Mónica joins the crew under the name "Stockholm", however Denver is reluctant to let her take part. He felt that she was should stay behind to take care of Cincinnati due to her lack of experience in heists. However, Mónica felt that Denver was being sexist and joins the heist at the Bank of Spain anyway.

During the Bank of Spain Heist, Mónica was appalled by the way Denver intimidated Miguel Fernández Talanilla, a hostage, and had second thoughts about their relationship. This angers Denver and makes him distance himself from her. After Rio returns, she supports him through his PTSD, but this upsets Denver as he thinks that they are being romantic. Later, when Denver witnesses Rio having a panic attack, he realises that Mónica really was just comforting Rio. They end up comforting him together.

Tokyo flirts with Denver in Part 4, after both of them have been broken up with. Rio confronts Denver about his feelings for Tokyo.

Moscow had a very friendly and sweet relationship with his son, and Denver looked up to him as a father, even though he wasn't an ideal role model.

Denver and Moscow have done heists together. Moscow describes their relationship as "just like the Sacapuntas Duo, but with burglaries." Denver originally wasn't supposed to be part of the heist plan, but after Moscow finds out that Denver is in debt and owed money to violent drug dealers, he talks the Professor into allowing Denver to take part in the heist. Moscow's goal was to earn enough money for him and Denver to live in a country whose name they can't even pronounce and spend their days drinking mojitos by beaches. After hearing that Denver killed a hostage, Moscow is distraught and believes that by bringing his son to the heist, he turned his son into a murderer.[6] 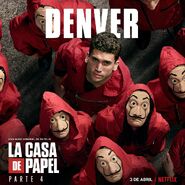