Palermo (on and off fling)

He is one of the robbers of the Royal Mint of Spain and the Bank of Spain. In the Royal Mint heist, Helsinki was mainly in charge of watching over the hostages, teasing Arturo, and chatting with Oslo. In the second season, he suffocated Oslo, who was in a vegetative state.

Helsinki was born in Serbia. He was a soldier in the Yugoslav Wars with his cousin Oslo. He has a family in Serbia, to whom he sends money when he can.[5]

During the war, he had a bullet taken out of him in a tractor garage.[6]

The Professor recruits Helsinki in addition to seven other robbers, including his cousin Oslo. He was responsible for making the Professor's Seat Ibiza disappear after Tokyo and Rio used it to go to the Museum of the Factory. The Professor gave him with a thousand euros in order to pay the employees of the car junkyard to destroy it in front of him.[5]

On Sunday 23 October, the Professor called the crew via the red telephone, to ask Helsinki if he had indeed destroyed the car. However, the car was actually still intact and in a scrapyard. Helsinki sent the money to his family and instead showed the Professor a photo of another car. This forces the Professor to leave his lair and go to the scrapyard in order to erase any evidence before the police arrive.[5]

Helsinki is the tallest out of the robbers, and possibly the heaviest too. He has a large frame and is very strong, like his cousin Oslo, presumably due to their backgrounds in war. He is completely bald on his scalp and sports a large beard.

Helsinki is bald and has a beard. He has a tattoo of a bear on his stomach.

Helsinki is Oslo's cousin, and together they fought in wars. Helsinki and Oslo are close, having traveled and done work together for a while before they are recruited by the Professor. Oslo trusts Helsinki enough to request Helsinki to kill him when he is put in a vegetive state.

Helsinki and Nairobi have always had a good relationship. Nairobi and Helsinki were paired together after the Royal Mint of Spain Heist, and spent time in eastern Europe. In fact, Nairobi fell in love and wanted to start a family with him.[7]

During the planning of the second heist, Palermo and Helsinki developed a physical relationship. Due to his heartbreak from Berlin, Palermo decided not to let anyone else come close emotionally, including Helsinki, whereas Helsinki had supposedly fallen in love with him. Whether Palermo loved him back is not given much attention. Later on in the show, Helsinki manages to break through his façade as their relationship grows.

Helsinki likes to make Arturo nervous, often belittling him by calling him "Arturito". In the last hours of the robbery, he covered him with fake explosives to scare him.[8] 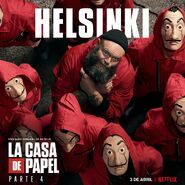