Belén Cuesta
Julia Martínez, also known by her code name, Manila, is a character in the Netflix series Money Heist, portrayed by actress Belén Cuesta. Julia joined the crew of robbers as requested by Moscow and Denver to The Professor, as they promised her father, Benjamin, that they would take care of her.

Although she was not included in the Royal Mint of Spain robbery, she did participate in the Bank of Spain heist. Her task consists of being among the other hostages, pretending to be one of them as a form of crowd control.

She constantly fakes needing to go to the bathroom to be able to inform the robbers about any developments. She is eager to drop the ruse and join the other robbers and eventually does so to prevent Arturo Román from revolting, shooting him in the leg.

Born as Juan, her father Benjamin is a close friend of Moscow. She and Denver have been close friends since childhood, with Moscow mentioning how they were like siblings. Because she is a transgender individual, she eventually transitioned as Julia, which Denver and Moscow did not know about until they saw her again. She changed her gender, which she revealed to Denver and Moscow in Part 3.

Moscow requested that she join the gang when they were planning the robbery of the Royal Mint of Spain in Toledo.

In Part 3, Manila is just another hostage in the Bank of Spain and has no major role in the heist yet. During this time, she is just doing her role as an undercover agent of the robbers. She is seen multiple times observing the hostages and their activities.

In Part 4, Manila gets more to do, as she is seen watching over Arturo Román's actions. We find out about her relationship to Denver and Moscow within flashbacks and their want to involve her in the Royal Mint of Spain heist. We also see Denver and Moscow's positive, if not a bit confused at first, acceptance of Manila being transgender. Back in the bank, after César Gandía's escape she and the other hostages are put together in the library. On the way there, Arturo offers her 'anxiety' pills, the same he used to roofie Amanda, so he could rape her. When a couple of the surrounding hostages find out and start yelling at Arturo, Matías Caño, who is watching over the hostages, goes to check out what is happening and gets ambushed by Arturo. Arturo grabs Matías' gun, but is shot by Manila with a pistol Denver gave her earlier, revealing herself to be an undercover robber.

In Part 5, Manila confesses to Denver that she has feelings for him. Denver tries to push her away, but when they talk, she makes Denver realise that he has much more in common with Manila than with Mónica. Denver and Manila end up sharing a kiss. 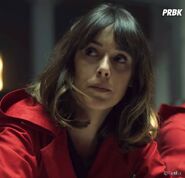