Luka Peroš (English, New)[2]
Jakov, better known by his code name Marseille, is a character in the Money Heist series.

He appears as a recurring character in season 3 and as one of the main characters in season 4. He has never entered in the bank but helps the gang and the Professor from the outside.

Not much is known about Marseille's early life. It was mentioned that he was a hitman. The only family he spoke of was his late dog, Pamuk (named after a village located in Somogy County, Hungary; it means 'cotton' in Turkish).

In "Strike the Tent", he mentions that he speaks Spanish, German, English, French, Italian, Croatian and Serbian.

He has a pet ferret named Sofía.

Marseille was a friend of Berlin, as we see him at Berlin and Tatiana's wedding. At Berlin's Wedding, Marsielle dances with the Professor, Bogotá, Tatiana, and Berlin.

Marseille mainly works as a silent intermediary between the police and the Professor. He uses two phones and is always moving so they cannot track the Professor and so they can't catch him. He also works as the Professor's man on the field.

After Raquel is captured by the police, Marseille crashes his car and stages the scene to make it look like the Professor is badly hurt. He is seen doing everything he can to help the Professor. He eventually goes to Algeria for the Professor to capture and record damning evidence against the police and the Spanish government.

Marseille is a calm man. He doesn't speak much and is sometimes mistaken as mute. He is vegetarian and claims that he would never hurt an animal. 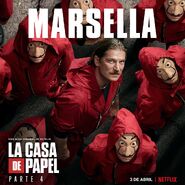