Money Heist (also known as La Casa de Papel) is a Spanish television heist crime drama series. Created by Álex Pina, the series was initially intended as a limited series to be told in two parts. It had its original run of 15 episodes on Spanish network Antena 3 from 2 May 2017 through 23 November 2017.

Netflix acquired the global streaming rights in late 2017. It re-cut the series into 22 shorter episodes and released them worldwide, beginning with the first part on 20 December 2017, followed by the second part on 6 April 2018. In April 2018, Netflix renewed the series with a significantly increased budget for 16 new episodes total. Part 3, with eight episodes, was released on 19 July 2019. Part 4, also with eight episodes, was released on 3 April 2020.

The first two parts revolve around a long-prepared, multi-day assault on the Royal Mint of Spain in Madrid, in which a group of robbers take hostages as part of their plan to print and escape with €2.4 billion. It involves eight robbers, code-named after cities and led by the Professor from an external location.

In the third part, the surviving robbers are forced out of hiding, and with the help of new members, they plan and perform an assault on the Bank of Spain. The fourth part continues this plot. 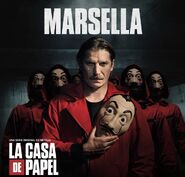 Add a photo to this gallery

Retrieved from "https://money-heist.fandom.com/wiki/Money_Heist?oldid=2481"
Community content is available under CC-BY-SA unless otherwise noted.