Berlin (formerly)
Helsinki (on and off fling)

He is born in Buenos Aires, in Argentina and has known Berlin for at least 10 years. Prior to the second heist, he had lived in Palermo, Italy. He is a trained engineer.

Although he was not part of the Royal Mint of Spain heist, he was an acquaintance of Berlin and The Professor prior to that. He collaborated with Berlin for coming up with the Bank of Spain heist and they both presented the plan to The Professor, who was uncertain about it. The Professor had his doubts about Palermo, claiming he cared more about his love for Berlin — with whom he exchanged a kiss — than the plan itself.

After the robbery of the Royal Mint, when the crew needed a way to rescue Rio from captivity, The Professor started organizing the Bank of Spain heist, bringing Palermo into the fold at a time when he was in pain due to the loss of Berlin.

Palermo was the man in charge at the bank, but his volatile personality soon caused tensions with rest of the group and Tokyo assumed command.

Palermo became a rival for the crew for some time and was responsible for talking Gandía, the bank's head of security, into freeing himself. However, he was eventually reintegrated into the group.

During the heist, he was shot at by Gandía and he ended up needing surgery to get shards of glass removed from his eyes. He spent the rest of the heist wearing an eye patch.

Palermo has brown hair. He is not very tall. He wore an eye patch for much of heist at the Bank of Spain due to an injury.

He is a complex, skilled engineer with egoistical tendencies. He needs to be in charge and doesn't tolerate being out of control very well. Being an impulsive character, he sometimes makes decisions without thinking them through, leading to unwanted complications. Nevertheless, he is able to admit his wrongdoings and willing to fix the problems they caused if possible. The first impression people get of him is that of a cold, mean and uncaring personality. It takes some time to realize that this is just the facade he has built for himself in order not to get hurt. Furthermore, he is passionate about the things he wants. He displays this for the heist, as it was made by Berlin, the man who meant the most to him and loved dearly.

Palermo was in love with his best friend Berlin for ten years, so much so that he suffered severely from depression after his death, turning to alcohol as a coping mechanism.

During an argument, Nairobi accuses Palermo of being so weak that he has never been able to tell Berlin that he is in love with him.[3]

During the planning of the second heist, Palermo and Helsinki developed a physical relationship. Due to his heartbreak from Berlin, Palermo decided not to let anyone else come close emotionally, including Helsinki, whereas Helsinki had supposedly fallen in love with him. Whether Palermo loved him back is not given much attention. Later on in the show, Helsinki manages to break through his façade as their relationship grows. 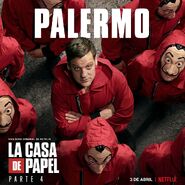