Traitor (by the Police)
Mrs. Professor (by Tokyo)

Cindy Robinson (English, Original)[2]
Ayelet Zurer (English, New)[3]
Raquel Murillo, later known by her alias, Lisbon (  es.  Lisboa ), was a Spanish police inspector that was assigned as the lead during the Royal Mint of Spain heist.

Raquel Murillo Fuentes was a Spanish Police Inspector based in Madrid. After the crumbling of her marital relationship with Alberto Vicuña, she filed a restraining order against him, and got full custody of her daughter, due to the accusation of his abuse.

Raquel Murillo was called on her day off, and asked to be the negotiator of the heist occurring at the Royal Mint. She agreed, and told the operator to send a car, and they tell her that it's already outside. From this, we can infer that Raquel was a trusted and well-liked Inspector.

Throughout the heist, she was responsible for negotiating with The Professor.

Despite being a more than capable investigator, she is tricked by The Professor, who gets closer to her under his false identity of Salva Martín in order to affect police activity. Although she eventually sees through the ruse, she falls in love with him and they run away together after the conclusion of the heist.

Murillo becomes part of the group of robbers as they prepare a second heist, this time targeting the Bank of Spain, and remains at the Professor's side as he begins operating behind the scenes again. She was captured by the police again, And later joins the robbers inside the Bank of Spain.

Raquel has blonde hair. She often ties her hair into a bun.

Raquel is strong and calm. She holds her own in the male dominated Police Corps. She was responsible for negotiating with The Professor.

However, Raquel can also be manipulated. She was abused by her husband Alberto Vicuña, which likely affected her self-confidence. The Professor used this knowledge to his advantage during the negotiation.

Raquel cares deeply for her family. She is forgiving of her mother Mariví Fuentes, even when she jeopardises the investigation and allows her abusive ex-husband to spend time her daughter Paula Vicuña Murillo. She took her mother and daughter to the Philippines with her, and was clearly concerned when the police threatened to go to the Philippines to find them.

Raquel was married to Alberto, a colleague who worked in forensics in the Spanish Police. She has a daughter, Paula Vicuña Murillo, with him. They later divorced due to domestic violence and Raquel filed a restraining order against him. During this time, Alberto started dating Raquel's sister Laura Murillo, to make everyone, including her mother, think that she accused him of domestic violence out of jealously. Raquel ended up getting sole custody of her daughter.

Raquel first meets the Professor in a café near the Mint when he lends her his cell phone to call her mother. They become friends and eventually fall in love, unaware that he is the "mastermind" of the heist. When she finds out, she does everything possible to trick him and take him to jail, but he eventually convinces her and she gives in to his plan, letting him escape with the money and finding him a year later in Palawan, an island in the Philippines. She later joins the heist as Lisbon and acts as the Profesor's second in line to the robbers inside the bank.

Raquel and Ángel had worked together and been friends for many years. Ángel had feelings for Raquel, but she refused to be in a relationship with him because they were colleagues. However, Raquel later dated another colleague Alberto Vicuña, much to Ángel's dismay. Ángel ended up marrying another woman, but he claims that he would be willing to leave his wife instantly for Raquel, if Raquel agrees to be with him. They are still friends even after Raquel left, like talking to Angel while Tamayo is tracking their call and even when Nairobi was killed and sent off, Raquel hugs and comforted by Angel. 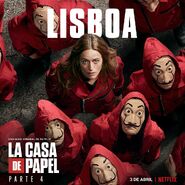 Raquel and Paula at home