Rio was born in Getafe. His nickname given by his mother was Rayo, meaning lightning bolt in Spanish. At young age he became interested in computers and began programming at the age of 6.[5] He often locked himself in his room for hours. His parents believed that he was working or playing on his computer, but he was actually beginning his career as a hacker.[6]

In 2010, he engaged in multiple cyber-attacks, which were all done discretely so the police couldn’t track him. He stole banking data and attacked North American servers. These hacks were reported by several online newspapers such as La Voz, La Nación, El Diario.com, however his identity was never discovered.

Rio took part in the heist at the Royal Mint of Spain heist. During the learning process and preparation for the heist, he developed feelings for his fellow robber Tokyo and they began a secret relationship despite The Professor's request for participants not to fraternize. On the day before the heist, he gives Tokyo a dogtag necklace with his real name and proposes to her.

On the first day of the heist, Rio hacks the security cameras and alarms of the Mint and redirects it the to the hangar where the Professor hides. While accompanying Alison Parker, he fights with Tokyo which allows Alison to grab her phone to delete the picture of her on Instagram. However, the police hacked her phone and turned on her front camera, allowing them to see the inside of the Mint and Rio's face. After the police identified him, they started searching for the identity of other robbers. Eventually, they discovered that Rio had visited the mint a few months ago with Tokyo, jeopardising the heist. When Berlin discovers the truth, he sends two fellow robbers to beat up Rio.

Left behind, Rio was found by law enforcement agents and captured. He was brutally tortured by Alicia Sierra and became the catalyst of a second robbery, the Bank of Spain heist, with the crew reuniting in an attempt to save him.

Rio is playful, naïve, and innocent compared to his fellow crew members, causing him to be considered the "weakest link". His naïvety caused problems, which drove the Professor to kick him out of the group, however Tokyo stopped it.

Rio still cares for his family. He was upset upon hearing his parents talk about their disappointment and was emotional when he watched the video of his parents. He considered surrendering himself, but later decided to continue with the heist.

Rio is a very skilled hacker, having attacked multiple websites and being recruited as the tech expert for a very complicated heist. He is shown to have enough knowledge of the deep web to know where he can buy weapons.

According to the Spanish police, he is an alarm expert that worked in a security company for 2 years.[7]

Rio is shown to be at least a bit skilled with weapons, knowing how to use them. As stated by Alison Parker, he doesn’t hold a weapon like a professional. He is supposed to be skilled in all the things the professor taught him and his fellow crew members, although some have never been shown.

Rio begins a romantic relationship with Tokyo during their time at the Toledo Estate.

Rio and Tokyo's relationship jeopardised on the Royal Mint of Spain heist, as it affected their behavior and caused them to make impulsive decisions.

After the first heist, they eloped together and spent time hiding on an island in the Caribbean. However, Tokyo eventually felt bored and desired to go to the city. When Tokyo forgets to call Rio, he stresses and repeatedly calls her. Unbeknownst to Rio, the cell phone was registered to him and his repeated calls allowed Interpol to trace his location, resulting in his arrest.

Mónica became especially close with Rio during the heist of the Bank of Spain as Rio was experiencing PTSD as a result of the torture by Alicia Sierra. It was hard for him to open up to other crew members, so he turned to Mónica as she was more understanding and caring. 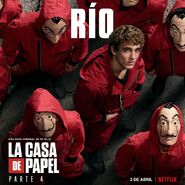