3
Sofía is a ferret owned by Marseille. She assists the robbers in Part 3.

Sofía is a ferret belonging to Marseille. She assists the robbers once Rio is returned to the group. She is given Rio's tracking and surveillance chip, and sent throughout the tunnels underneath the Bank of Spain with it to trick Alicia Sierra and Luis Tamayo. She is captured once the police are able to locate her.

Sofía looks like a ferret. She has brown and white fur. She also has her own little red jumpsuit. 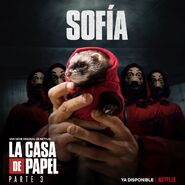