He was the mastermind responsible for organizing the Royal Mint of Spain Heist and later oversaw the Bank of Spain Heist, which had been initially planned by Berlin.

The Professor had been planning heists from a young age. At the age of 19, he stopped renewing his identity card, so that he would not be registered.[4]

The Professor recruited 8 robbers to carry out a heist at the Royal Mint of Spain, a heist that his father had planned.

Under the false identity of Salvador "Salva" Martín, he was able to get closer to the lead inspector assigned to the Royal Mint robbery, Raquel Murillo, and the pair eventually fell in love. Raquel then joins the gang by the name "Lisbon".

The Professor led a second heist in the Bank of Spain, in an effort to pressure the Spanish government who had arrested Rio. This was a heist that he and his half-brother Berlin had planned years ago.

In Part 5, the Professor is captured and tortured by Alicia Sierra. She ends up capturing Marseille and Benjamín Martínez as well. However, when Alicia goes into labour and has complications, she has no choice but to untie them, so that they can help deliver her baby.

The Professor and Alicia end up working together. When police chase them, they hide in an empty apartment. Later, Alicia helps find the location of the stolen gold.

Sergio is a male with a mustache and a beard in very good physical condition. His hair is long and black, and he cuts it slightly shorter in Part 3.

His gait portrays him as slightly confused, as he doesn't swing his arms when walking.

He is rarely seen without a formal suit, overcoat and tie, but has also been seen to don various disguises to avoid detection by police, eg. a homeless drug addict and a clown.

Sergio is highly intelligent and meticulous. He appears to be very determined to pull off the greatest money heists in history, after planning for it for several years. Once he recruits his dream team, he makes everyone religiously follow a strict schedule, complete with fundamental rules to prepare for and execute the heist. His perfectionist attitude is apparent through his careful consideration and planning for all possible scenarios that could arise during the heist. This forward-thinking approach helps him in his strive for perfection, where he urges the team to 'stick to the plan' in every situation.

The Professor appears to have exceptional knowledge in negotiation tactics, police strategy, weaponry, law enforcement, hostage crises aversion, forgery, theft and bank robberies. He was able to control the entirety of the heist from behind the scenes, playing with the police and constantly tricking them into doing exactly what he wanted them to do. He also demonstrates a deep understanding of human psychology. A majority of his plans gravely depend upon the reactions he predicts from the police, the government, and the public. This allows him to play a tense game of one-upmanship with Inspector Raquel Murillo, where he repeatedly manages to shift the status quo in favor of his team during the heist, despite overwhelming odds.

His calm demeanor complements his innate leadership traits, which allows him to resolve team conflicts without a fuss. Moreover, team members have great trust in his plans and decision-making ability. This is apparent when the team chooses to respect the protocol of waiting for 24 hours for his phone telephone call before activating 'Plan Chernobyl', despite clear evidence on the television of his impending imprisonment a few hours before the deadline. They do this as they have immense respect for his intellect and believe he will do everything in his power to save the team from any crisis.

Sergio also thinks of himself as a strategist similar to a chess-player, who needs to carefully calculate every move before arriving at a conclusion. This allows him to make crucial decisions in very short periods of time when situations go awry. He may possibly be an expert martial artist, as he easily subdues Alberto and Raquel on separate occasions. He is shown practicing boxing and undergoing intense physical training in his hideout.

Despite planning the biggest heist in human history, the Professor maintains stringent moral principles. He refrains from killing Raquel's mother even when it appears to be the only possibility of survival for the heist. He maintains that not spilling blood is the most important rule of the heist. However, it is unclear if this is only due to consideration of public opinion, or if it arises from a moral standpoint. He also shows great compassion and love for his team members, despite beginning his heist classes with the 'No Personal Relationships' rule.

Raquel first meets the Professor in a café near the Mint when he lends her his cell phone to call her mother. They become friends and eventually fall in love, unaware that he is the "mastermind" of the heist. When she finds out, she does everything possible to trick him and take him to jail, but he eventually convinces her and she gives in to his plan, letting him escape with the money and finding him a year later in Palawan, an island in the Philippines.

The Professor was the first person that Tokyo meets in the crew, and was the one who saved her from spending her life in jail. Throughout the series, Tokyo has shown to greatly admire and respect The Professor, even going so far as to call him her 'guardian angel'.

Berlin and the Professor are half-brothers and have a close relationship.

In a flashback of Berlin and the Professor in Italy, Berlin reveals that he has Helmer's Myopathy, a condition that his mother had as well. The doctors predicted that he would have 3 years to live, but Berlin is hopeful that he will have 6 or 7 years to live. The Professor immediately decides to call off the heist and find treatment for him abroad, but Berlin refuses as there is no cure and he preferred to continue with his passion - robbing.

Alberto met the Professor, when he was disguised as Salva. Alberto did not like the Professor and his relationship with Raquel. They first meet at The Toledo House and get into an argument when Alberto drives the Professor back to Madrid. Their argument culminates in a fist fight which the Professor quickly wins. With this, Alberto uses the chance to arrest the Professor under the assumption that he is Salva. 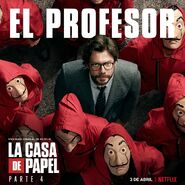 The Professor watches over the heist from outside

The Professor explains his plan 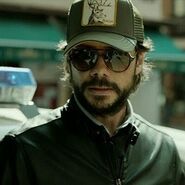