Cristina Valenzuela (English, Original)[4]
Hollie Sokol (English, New)[5]
Silene Oliveira, better known by her code-name Tokyo (  Spanish:   Tokio ), was one of the main protagonists of the Netflix series Money Heist, as well as the narrator of the story. She was a member of the heist crew set to rob the Royal Mint of Spain.

A the age of 14, Tokyo joined her 28 year old boyfriend into a world of crime. Together, they successfully pulled off 15 heists.[6]

One of Tokyo's heists with her boyfriend involving a Prosegur pickup truck ended in a shootout that killed three people, including her boyfriend. From then on, she became a fugitive. Posters with her face were put up all over Spain. While on her way home to see her mother for the last time before embarking on a ship, she was stopped by The Professor, who warned her that her mother's house was surrounded by police. He offered her to join his heist, along with 7 other robbers.

Haunted by the death of her ex-boyfriend, she vows to not mix heists with love. However, she quickly falls for Rio, a young and tech-savvy robber.

In Part 5, Tokyo is shot during a shootout with soldiers. Due to her injuries, she is unable to escape into the dumbwaiter, where the other robbers are waiting for her. She ends up being shot multiple times and and lays on the floor while the soldiers approach her. Gandía stands over Tokyo to mock her, so in a final act of defiance, she detonates the grenades, killing Gandía, Salvador Torrecilla, Lucas Hernando, Isaac Cobo, along with herself.

Tokyo has brown hair and brown eyes Most of the time, her hair is rather unkempt and of medium length, with the only part seemingly getting shaven or cut being her bangs, which are cut in a straight way as not to cover her eyes, and nothing more. On some occasions, she is seen with a different haircut, such as a bun.

Tokyo is reckless and impulsive, she usually acts before she thinks, which sometimes results in things she regrets. She let her relationship with Rio complicate the plans for the heist. She is quick to lose her patience, as well as sometimes being shown to quickly draw conclusions. She can’t control her emotions very well and also expresses them intensely.

She was the first to begin worrying when The Professor did not respond to the check-up calls, and almost immediately began taking extreme measures. She is, however, shown to care deeply for those whom she loves, as shown as when Rio is shot at the beginning of the show, and when she finds out her mother passed away. She can be very protective and loving with the people she truly cares about.

Tokyo is confident and doesn't mind using her looks and sexuality to her advantage.

Rio begins a romantic relationship with Tokyo during their time at the Toledo Estate.

Rio and Tokyo's relationship jeopardised on the Royal Mint of Spain heist, as it affected their behavior and caused them to make impulsive decisions.

After the first heist, they eloped together and spent time hiding on an island in the Caribbean. However, Tokyo eventually felt bored and desired to go to the city. When Tokyo forgets to call Rio, he stresses and repeatedly calls her. Unbeknownst to Rio, the cell phone was registered to him and his repeated calls allowed Interpol to trace his location, resulting in his arrest.

At the Bank of Spain Heist, Rio and Tokyo get through thick and thin. Even Rio tried to save Tokyo but fails.

René, the man Tokyo started to dock with, traveled with and enjoyed before Silene Oliveira knew that things sometimes go badly wrong.

Tokyo flirts with Denver in Part 4, after both of them have been broken up with. Rio confronts Denver about his feelings for Tokyo.

Out of all the people in the crew, Berlin is one of the people that Tokyo disliked the most. She had defied and challenged him on multiple occasions throughout the show, even going so far as to hold him at gunpoint to get him to do what she wanted. The height of her aggression with Berlin was when she played Russian Roulette with him in the bathroom, which drove Berlin to tie her to a cart and push her out of the Royal Mint.

The Professor was the first person that Tokyo meets in the crew, and was the one who saved her from spending her life in jail. Throughout the series, Tokyo has shown to greatly admire and respect The Professor, even going so far as to call him her 'guardian angel'.

During an anatomy class, Tokyo sees a scar on Nairobi's lower abdomen and discovered that she had a child via caesarean section. Later that night, Tokyo comes to Nairobi. The two women open up and Nairobi reveals that she plans to get her son back after the heist.

Moscow took on a fatherly figure to Tokyo also. She grew fond of the old man and admired his fatherly personality. Moscow has been rude to Tokyo before, saying that she was the kind of person that “jumps over a river and leaves the rocks falling behind her”, although he later came to regret that he said this.

After Tokyo witnesses Rio and Alison talking in the bathroom, Tokyo becomes jealous. After Rio leaves, she intimidates Alison and kisses her. 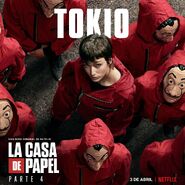 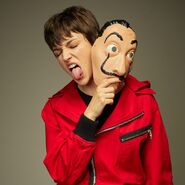 Tokyo arrives at the scene of the heist

Berlin and Tokyo in class

The robbers get ready